“We’re never really quite satisfied with anything we do,” says Elizabeth Diller, founding partner of the ultramodern architecture firm Diller Scofidio + Renfro. It’s not quite a humblebrag, more a lingering anxiety about her most famous creation: New York’s High Line.

When the first section of the elevated park opened in Manhattan, in 2009, it transformed the island’s west side. Once a dilapidated train track, the High Line is now flanked by luxury condos and office buildings designed by the world’s leading architects. But as she watched the area rapidly gentrify — driving out longtime residents — it began to gnaw at Diller, who’s lived in Manhattan since her family emigrated from Poland when she was a child. “The question is, ‘How do you prevent that from happening?’ Would we have designed it any differently? No,” she says. “I couldn’t make it any less good. We have to design forward, and we have to make the best things that we could possibly imagine making. And if they’re popular, so be it.”

It’s this sort of focus on community issues that has motivated Diller, 66, since the beginning, and has continued to inform her work. Going to high school in West Harlem in the late 1960s, she was preoccupied with the era’s social unrest and skipped school to take part in the movement. “There were anti-war protests; students were really active. I just don’t remember a single day of high school,” she says. When she started attending Cooper Union in the 1970s, it was a creative hotbed and home to avant-garde design. Initially intent on being an artist or filmmaker, Diller was quickly seduced by architecture. “I got interested in alternative strategies in space-making,” she explains.

Even then, she was more interested in the East Village music and art scene than she was in classes. But it was one of the school’s design professors, Ricardo Scofidio, who became her lifelong partner. After she graduated in 1979, they moved into a loft on Cooper Square and set up an office. They were conceptual artists, known more for darkly comic design hacks than actual buildings. Their 1994 book, Flesh, a compendium of their thoughts and designs, put forward the idea that “anything can be architecture.” “When we started the practice, we simply wanted to observe the ordinary. We wanted to question it,” she says. “We wanted to question habits of space.”

In 1999, they became the first architects and second married couple to receive a coveted MacArthur “genius” grant, and in 2002, they attracted worldwide attention for their Blur Building — a pavilion that sprayed jets of mist to create a nimbus cloud into which visitors could walk — at that year’s Swiss Expo. Their 2003 Whitney Museum retrospective — which displayed water glasses that incorporated hypodermic needles and an installation of white dress shirts ironed into origami-like constructions — included a robot that drilled holes in the gallery walls, creating noise and dust throughout the exhibition, an act of resistance against the very institution that was celebrating their work.

Over the years they tackled complex projects with major institutions — Boston’s Institute of Contemporary Art; a reimagining of Lincoln Center — but it was the Broad Museum in 2015 that proved to be a milestone. Located alongside Frank Gehry’s Walt Disney Concert Hall in L.A., it houses the majority of billionaires Eli and Edythe Broad’s contemporary art collection — full of works by Jeff Koons, Andy Warhol, and Jean-Michel Basquiat. In some ways, it’s a simple white-box gallery, but the concrete “veil” that shrouds the building became an instant icon, helping cement Diller’s singular status within her generation.

Amid all the building, Diller continues to envision nimble solutions to transform our world. In 2019, she opened the Shed, a flexible arts space on a small strip of public land alongside New York’s Hudson Yards. The year before, she launched the Mile-Long Opera, a large-scale performance work she created with composer David Lang that included a thousand people chanting and singing across the length of the High Line. It was an attempt to creatively reclaim the space and remind people how special it can be — when it’s not bottlenecked with tourists.

“The opera was totally ground up,” she says. “I had to raise the money and get the talent together and get the permissions and figure out how to do it. . . . I feel that architects should do things that they’re totally unqualified to do.”

DS+R remains a collaborative practice — more than a hundred architects, designers, artists, and researchers work on projects around the globe. But it’s hard not to see Diller as the operation’s oracle: She has a knack for navigating clashing agendas within cultural institutions and can persuade even the toughest pragmatists by relentlessly arguing for her ideas with airtight reasoning. “You don’t fuck around with her,” says Thom Mayne, the Pritzker Prize-winning architect whose Morphosis firm is often up for the same commissions. “She’s got a mind that works at the speed of light. There’s really no other figure in this country who does more interesting work.”

Yet unlike Mayne, Diller has not won the Pritzker, the industry’s highest award. Sarah Whiting, dean of the Harvard Graduate School of Design, who previously taught alongside Diller at Princeton, believes Diller’s work may be too conceptual to be nominated. The award recognizes buildings, not projects that challenge the notion of what architects do. “Or maybe it’s the issue of not playing the ego card as much as the guys in the profession have,” adds Whiting. “I don’t feel like she’s constantly articulating ‘Liz-ness.’ ” 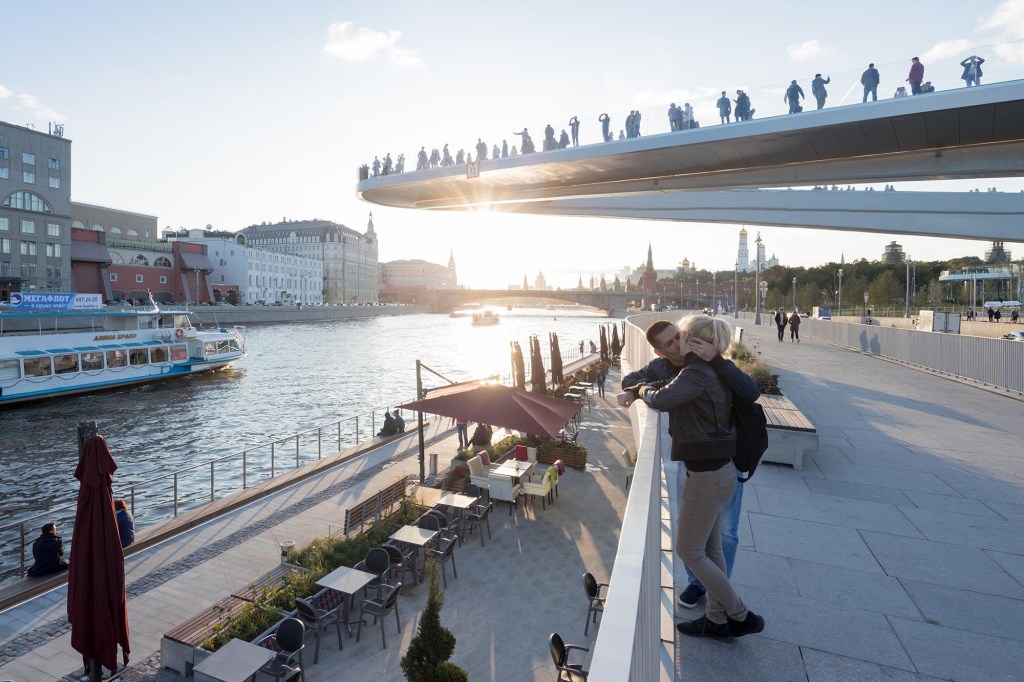 Zaryadye Park in Moscow, which opened in 2017.

Similarly, Diller is surprised whenever their avant-garde firm is picked for jobs. “I’m wondering why we ever actually win competitions, because we’re sometimes almost shooting ourselves in the foot,” she quips. Take, for example, Moscow’s Zaryadye Park, which opened in 2017, steps away from Red Square. “They discouraged making a big space for gatherings — we did just the opposite,” she explains. “Our design was an act of resistance against traditional park planning in Moscow, which is often landscaped with a sanctioned list of trees, shrubs, and plantings that you’re typically not allowed to walk on.”

Instead, they used indigenous Russian plants to create large spaces for people to gather. “We felt like we had no shot, it was just good to participate. So we were shocked when we won and our plans were more or less protected.” After it opened, there were reports that people were caught on security cameras having sex in the park, inciting some to say Westerners were corrupting Russia. “But I thought that it was a real badge of honor,” she says. “That we let people feel uninhibited and they were having intimate relations — what could be better than that?”

All television shows are collaborative creations, but the Marvel Cinematic Universe shows add a few layers beyond what’s normal. For