Ryan Gould has worked as a string bass player in Austin since 1999, playing early jazz music in bands that include the Texas Moaners and the Rock Step Relevators. He and his wife Lauryn, a horn player, live in Southeast Austin, and performed around the city most nights of the week before the pandemic. We reached out to Gould after a devastating winter storm in Texas overwhelmed the state’s energy grid and left millions without power and water. He told us how Texas musicians are faring in light of the disaster.

My wife and I are both full-time performing musicians. I’m a string bass player and she’s a saxophone player. Most of our gigs are together; we both play Twenties and Thirties early jazz. We’ve just been stuck in the house. We grabbed a friend of ours, who’s a musician herself; she was living in a trailer before the cold hit. Oddly enough, we haven’t played much music together, because I think we’re all at that point where every time you touch your instrument, you’re kind of like on the edge of crying, because it’s been 11 months of not doing the thing that has driven us for twenty-some years.

I don’t expect a county in the south to be super prepared for a major winter Arctic storm. But they just seem to be bungling things left and right. I’ve been watching Facebook and seeing our friends who have been out of power for 48 hours, then 72, then 96, and it takes everything not to just lose my temper. My wife’s dad and stepmom in north Austin have no power and no water, and are melting snow with a candle so they can flush the toilet. And then you have the state, which is incompetent and immoral. Ted Cruz just decided to go to Cancun in the middle of this, basically going, “Yeah, go to hell, guys.”

My wife Lauryn and I used to play two or three gigs a night, six or seven days a week. Monday nights, we held a residency at a seafood joint called Quality Seafood — a very creative name. It was essentially a happy hour gig, but a nice paycheck and some decent tips. We’d do our Twenties and Thirties jazz there, then as soon as we were done, we’d pack up and fly off to a place in deeper East Austin called the Sahara Lounge, where she would do two gigs a night in a band called the Charlie Christians. Then I’d be behind her, playing with a band called Swingtet, which did Forties Basie-style, Kansas City swing. Wednesday nights, I’d play another residency night at a place called the White Horse, which was essentially a dirty honky tonk, and then head off to the Continental gallery, or do a late night at the Elephant Room. I don’t think a day has gone by that we live in here where I don’t wake up and count my lucky stars.

I was in the Marine Corps before this. I grew up in a burned-out steel town near Philly. I thought my life was just gonna be misery, working at an aluminum factory or something after I got out of the service. Being a Marine, I got to travel around the world and see all these different cultures. In every port I was ever in, I ended up playing music with people. Feeling the cultural richness of music and traveling around the world and hearing other kinds of music, I’d come back to Philly, and it was bleak. My favorite bands were all coming out of Austin. Most of them were on Watermelon Records. So I started following those bands, and some of those guys were like, “Come down to Austin, you can play any night of the week. You can play death metal at one club, and then you can go play jazz in the next.” That was super appealing. I grew up as a death metal guitar player. Twenties and Thirties jazz was the next logical step, of course. Don Walser, the country singer, did an interview where he talked about playing at the Broken Spoke in Austin. He could look up and see a bunch of folks dancing around in cowboy boots, and ten gallon hats. And then, in the same breath, some guy in a big green mohawk would dance by. That’s one of the beautiful things about Austin — having these great mixed crowds. I can play old jazz for a bunch of folks that are two-steppin’. It’s just so fantastic.

When the pandemic hit, my wife and I found a lot of grants. Floyd Domino, the piano player, is really well connected to the union here in town and the Grammy organization. He kept feeding us different grant possibilities, so we’ve been really fortunate to be able to snag some. We’re also extremely fortunate to have some really generous fans. This one retired fellow would come to our Quality Seafood gig. He’s an aspiring musician, and would always be very generous with his tipping. Every three weeks during the pandemic, I would get a little bump in the PayPal account from him. He said: ”You guys are one of the bright lights in this city, and I don’t want you to dim. This is the money I would have spent on you and tips anyway.” That’s so incredible. It’s helped us get by, just people sending money going, “Hey, you know what? Here’s 500 bucks,” out of nowhere. You know, 11 months in, I’m just like, I don’t know how we’ve done it. I really believe it’s just been the kindness of the audience that’s kept us floating.

Watching what’s happened the last two days, the Marine in me wants to just go ballistic. Of course, not storm the damn Capitol. The marine in me is also very pissed off about that, having signed my life away to defend the Constitution and watch our leaders just piss all over my oath. I’m infuriated with the city of Austin. I feel like it’s just bumbled through so much, pandemic included. All of the places we love playing are closing. Steve Wertheimer, the owner of Continental Club, is a paragon of virtue to me. He won’t open until he knows that it’s safe. He is really going for it there, protecting the community and serving the audience and the staff by saying, “No, we can’t do this yet. It’s not safe.” He’s making this huge, huge sacrifice, and the city’s just going “Well, I’d rather keep the money for the Convention Center.” By all studies, the Convention Center is a dying thing, and completely pointless. 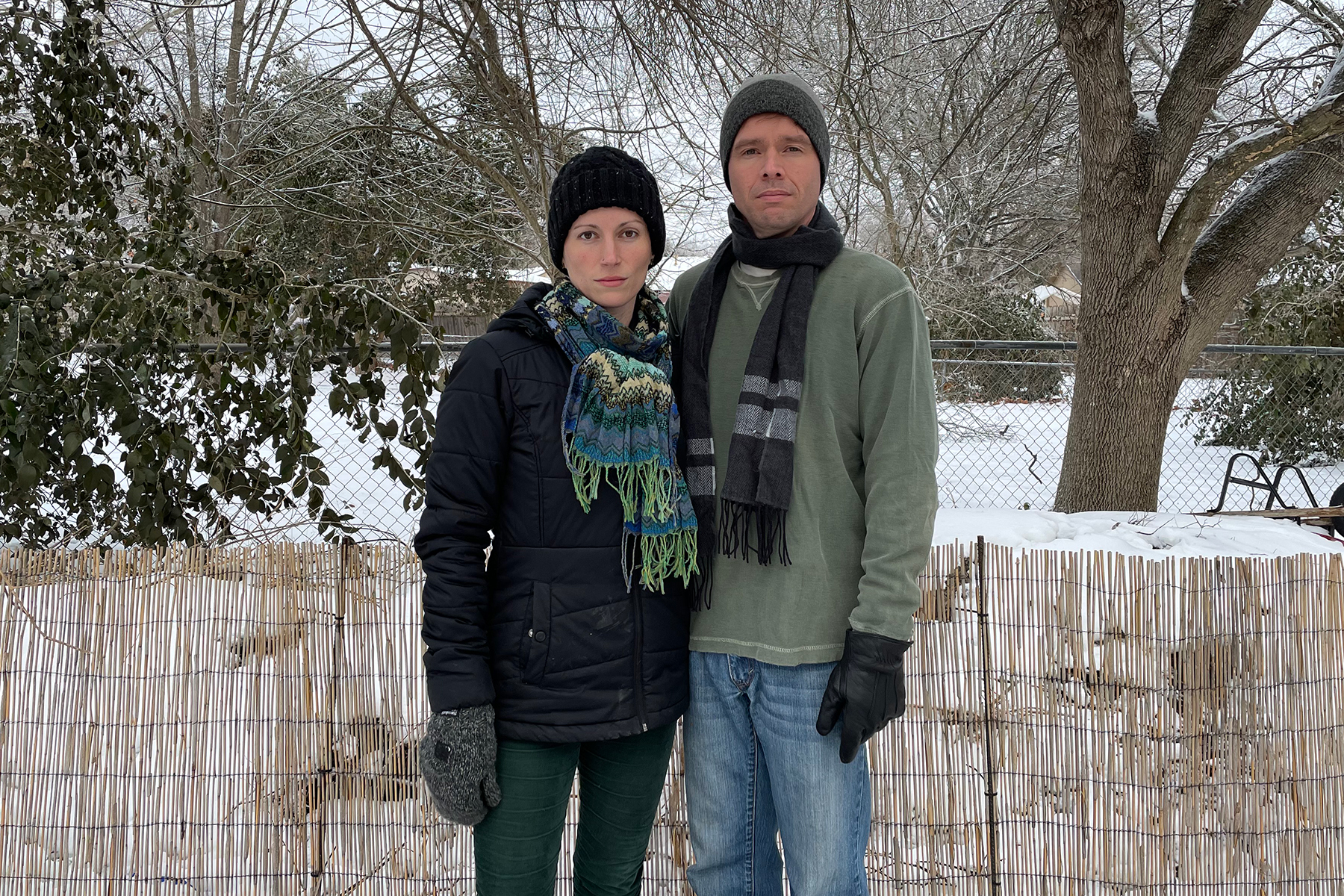 Courtesy of the Goulds

Why aren’t we investing in progressive attitudes and policies? On Monday, the Texas Public Utilities Commission just dropped a new policy — a rate increase for power — saying that they didn’t have enough money to maintain the standards of all the corporate power generators, which is just absolute lies. It’s just so infuriating. So many of my friends are just counting on the kindness of others.

After the last two days, I really hope that Texans actually go, “Okay, that’s too much.” After the pandemic, after the absolute shit-show that the last four years have been, and all of the the ugly, horrible social issues that have been magnified by [Trump]. I hope everyone in Austin realizes that they’ve kept power on in empty government buildings downtown. I just saw a picture a local photographer took of the skyline in Austin. The highway divides downtown and East Austin; in segregation times, all the people of color were forced there. And it’s not really that different at this point, no matter how shiny and happy they make Austin look. It’s still kind of that situation.

I hope that once the pandemic is [over], it pushes people to actually get active and make proactive steps towards equality and pure and simple responsibility for your actions. I’ve been really fortunate to work for Swan Songs in town, an organization that does hospice music. That’s one of the gigs I will not say no to, even during the pandemic, because that’s an audience that needs music. You have to take an active approach to being a citizen. It’s all of our responsibilities to be engaged, and hold our elected officials responsible for stuff. You don’t see a piece of trash on the ground and walk by it because you didn’t put it there. It’s on the ground. And this is your planet. It’s your responsibility to pick that up, even if you didn’t throw it down.

Underrated 2020 Music: 18 Great Albums You Might Not Have Heard