The Moral Majority’s agenda included opposition to homosexuality, abortion and the Equal Rights Amendment, which would have guaranteed equal rights for all citizens regardless of sex. Advocating for “traditional” family values, Falwell and his powerful organization are credited with delivering the crucial white, evangelical vote to Ronald Reagan during the 1980 presidential election.

Of course, that put him in the crosshairs of progressives. In its November 1983 issue, Hustler magazine published a satirical ad focused on Falwell. The piece was modeled on Campari’s popular advertising campaign, in which celebrities recalled their “first time” drinking the brand, a double-entrendre.

In the parody, a dignified headshot of Falwell complements a bottle of the imported aperitif, with a transcript of the supposed exchange written in-between. Asked by the interviewer about his “first time,” Falwell responds: “I never really expected to make it with Mom, but then after she showed all the other guys in town such a good time, I thought ‘What the hell!’” He then recounts a Campari-fueled sexual experience with his mother (and a goat) in an outhouse.

The ad concludes with Falwell highlighting his preference for Campari: “I always get sloshed before I go out to the pulpit. You don’t think I could lay down all that bullshit sober, do you?” (In small print at the bottom of the page, the magazine wrote, ”Ad parody – not to be taken seriously.”)

The fake interview was politically barbed, to be sure, not to mention crude. But it was also an oddly personal moment and a focal point in the ongoing culture wars. Eventually it would set a key precedent for freedom of speech.

To Flynt, however, Falwell was a hypocrite whose rhetoric caused outsized harm. Hustler (dubbed “the only honest publication out there” by its owner) began needling Falwell, publishing the advertisement featuring the Baptist preacher’s deceased mother. Falwell sued for libel, invasion of privacy and intentional infliction of emotional distress, demanding $45 million in damages, approximately $100 million by today’s standards.

Representing two wildly different points of view, the men’s feud punctuated cultural and religious backlash in the Eighties, as well as an ongoing debate about American values. In some ways, Flynt and Falwell’s backgrounds were actually not dissimilar. While Falwell was raised in Virginia, Flynt grew up in eastern Kentucky. Before joining the Navy, Flynt dabbled as a bootlegger; so had Falwell’s father. By the early 1980s, however, the two men had cut distinct and entirely opposite public profiles on their way to enormous self-made success. Whereas Falwell counted top national political leaders as allies and friends, Flynt was counseled by Ruth Carter Stapleton, sister to President Jimmy Carter, during his brief conversion to Christianity.

The crux of Flynt’s argument centered on the Sullivan rule, established by the Supreme Court in 1964 as the “actual malice” standard to gauge whether press reports about public officials were defamation or libel. (Falwell’s counter: Hustler did not apply as legitimate press, and his family had been defamed since they were not public figures.) Initially, a district court found in favor of Flynt on the libel charge but Falwell was awarded $200,000 in compensation for emotional distress, which was then upheld by a federal appeals judge. Again, Flynt appealed.

In December 1987, Hustler v. Falwell was heard in front of the Supreme Court. In a unanimous 8-0 ruling penned by Chief Justice William Rehnquist, the Court ruled the emotional distress inflicted by the ad did not warrant cause to deny Flynt his First Amendment rights, sustaining the Sullivan rule and making the case a “victory for journalists and First Amendment advocates,” according to a February 1988 New York Times story.

Ultimately, the court decided, public figures like Falwell needed to prove malice to collect damages. Since libel implied the ad was knowingly presented as truth, Rehnquist wrote they accepted the lower court’s judgement that “the Hustler ad parody could not ‘reasonably be understood as describing actual facts about [Falwell] or actual events in which [he] participated.” While the caricature was “at best a distant cousin” to the country’s long tradition of strong political satire, including the Harper’s Weekly cartoon depictions of Boss Tweed, which undermined the infamous Tammany Hall leader’s power – it could not be penalized on outrage or taste alone.

The fact that “society may find speech offensive is not a sufficient reason for suppressing it. Indeed, if it is the speaker’s opinion that gives offense, that consequence is a reason for according it constitutional protection,” Rehnquist concluded.

Of course, Flynt was no stranger to First-Amendment battles before Hustler v. Falwell, having been convicted of obscenity and conspiracy in 1977. (He was also jailed for wearing an American flag as a diaper in court after leaking a surveillance tape of the arrest and entrapment of John DeLeorean by federal agents.) His First-Amendment court battles, including his embroilment with Falwell, made him an unlikely free speech icon, later depicted in the Oscar-nominated 1996 film, The People vs. Larry Flynt.

In 1998, in response to the Clinton impeachment proceedings, his publications on sexual hypocrisy led to the resignation of incoming House Speaker Bob Livingston. To this day, he continues to weigh in on public debates pertaining to hypocrisy and the country’s sexual values. This year, he purchased a full-page ad in The Washington Post, offering $10 million to anyone with information that could lead to President Trump’s impeachment. (At a recent screening at the Brattle Theater in Cambridge, Massachusetts, People vs. Larry Flynt star Woody Harrelson commented on the ad: “It’s fantastic… I wish I had some information for him.”) 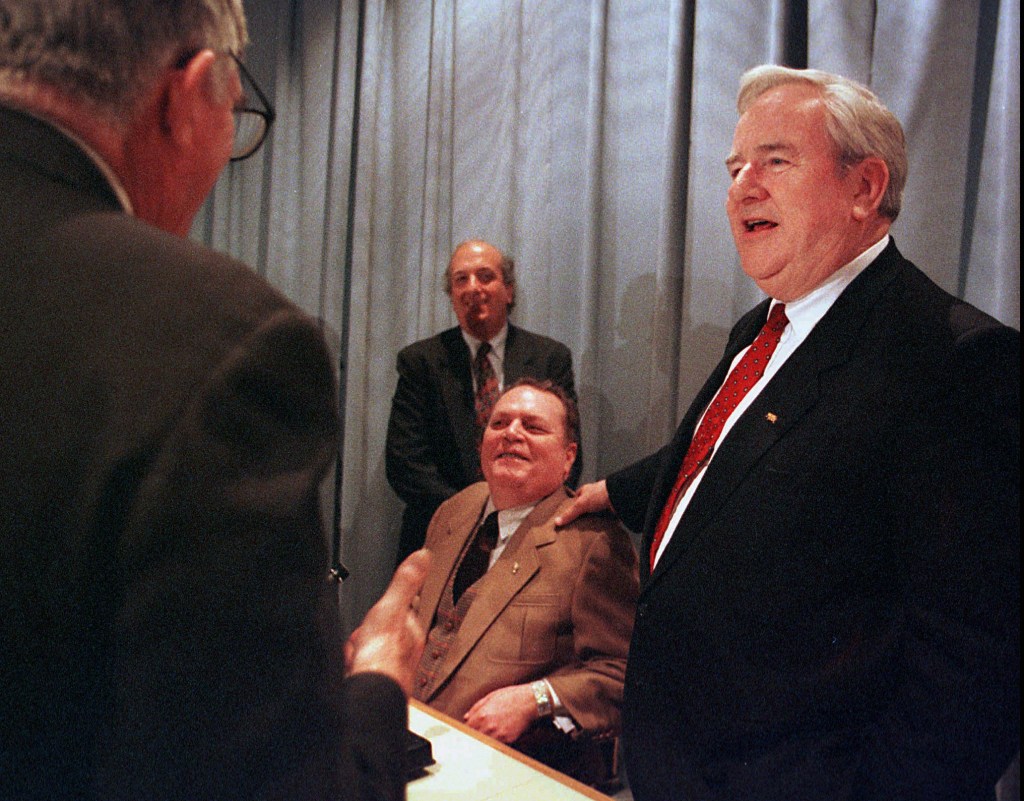 Long after the lawsuit, Falwell and Flynt became friends.

Falwell and Flynt eventually joined forces in a series of public appearances in the late 1990s debating issues surrounding freedom of speech. According to Flynt, privately the two became friends, despite their religious and political differences.

The Hustler magnate referenced the case on Twitter in August 2017, and has described the contentious legal dispute as “a battle that had changed the laws governing what the American public can see and hear in the media and… dramatically strengthened our right to free speech.” In fact, increasingly Hustler v. Falwell has become a landmark First Amendment case since its ruling. Hundreds of courts, and numerous higher education institutions, have relied on the ruling to clarify important protections on a variety of First Amendment issues. And in an era of perennial comedic political takedowns — and heightened discussions about the right to express repugnant thought — it remains a quietly relevant and important tenet to our democracy.

[Editor’s Note: A version of this story was originally published in November 2017]