On the surface, the story and theoretical appeal of Netflix’s new drama Firefly Lane seem clear. It is a decades-spanning tale of female friendship, meant to inspire laughter and lunges for the tissue box in equal measure, as it follow two women who both envy and complete each other. And it puts together a pair of seasoned TV stars: Katherine Heigl as Tully, the glamorous and confident one, and Sarah Chalke as the more modest and meek Kate. Adapted by Maggie Friedman (Witches of East End) from the bestselling novel by Kristin Hannah, Firefly Lane aspires to be the streaming equivalent of cuddling under a warm blanket with your best friend and two tall glasses of wine (which Tully and Kate do early in the first season).

Firefly Lane the series is unfortunately a failure of both style and substance. In between all the clichés it borrows from Beaches and various Lifetime and Hallmark films, it relies on a This Is Us-style fractured timeline to layer in some mysteries. But the format undercuts what little power Tully and Kate’s story is able to generate in occasional moments throughout the 10-episode first season. And the out-of-order narrative adds very little, other than the chance for Friedman to put her two high-profile leads onto the screen much earlier than if she were going chronologically.

This Is Us, of course, didn’t invent that structure . But it was notable for its cross-pollination of weepy family drama tropes with ones from mystery-box sci-fi series — as if writers’ assistants for Parenthood and Lost crashed into each other and walked away with their scripts co-mingled. That mixture was enough to turn This Is Us

into the kind of phenomenon that broadcast network shows aren’t supposed to be anymore, and inspired a brief and mostly unsuccessful wave of copycats. Heck, This Is Us wasn’t even the first family drama to try it.One of Friedman’s earliest TV writing jobs was on Jack & Bobby, a short-lived WB series that debuted in the same season as

Lost . Another genre hybrid, it blended a heartwarming story of two teenage brothers with flash-forwards revealing that one would die and the other would grow up to be president, and teased other mysteries along the way. It’s not hard to imagine Friedman realizing she could flex those muscles again with this project. Firefly Lane runs into several problems with this approach. The first is that the whole puzzle component tends to be more fun as a weekly conversation with lots of other viewers than as a show meant to be binged in a weekend, maybe along with a good pal. The instant gratification of getting explanations — some explanations, anyway, since the show leaves several mysteries dangling for a potential second season — isn’t nearly as satisfying as the the chance to spend the time in between theorizing and debating what everything means. As

Lost viewers learned (many quite angrily), asking questions in television is almost always more fun than getting the answers. The second is that the questions here — Whose funeral are Kate and her daughter Marah (Yael Yurman) attending in periodic flash-forward? Are Kate and Tully on the verge of going their separate ways? What went wrong in Kate’s marriage to Tully’s boss Johnny (Ben Lawson)? — aren’t all that thrilling to begin with, even before you get to the fairly lame solutions. (Warning: When you find out whose funeral it is, your eyes may roll so far back into your head you won’t be able to see the remainder of the finale.) Worst of all, though, is just how difficult it becomes to stay focused as we bounce between the series’ present (which is actually 2003), where Tully is a popular syndicated talk-show host and Kate a divorced stay-at-home mom; the Seventies, when a teenage Tully (Ali Skovbye) and her hippie-junkie mom, Cloud (Beau Garrett), move in next door to young Kate (Roan Curtis); the Eighties, when Tully and Kate are trying to make names for themselves in the TV business; and eventually, the two of them in college (where they are also distractingly played by Heigl and Chalke, rather than the much more plausible-looking Skovbye and Curtis). It’s not that the stories are hard to follow this way, but that the time-hopping disrupts whatever emotional resonance the show keeps trying to build. Where This Is Usat its best (or Lost , for that matter) uses developments in one timeline to complement or explain what’s happening in another, 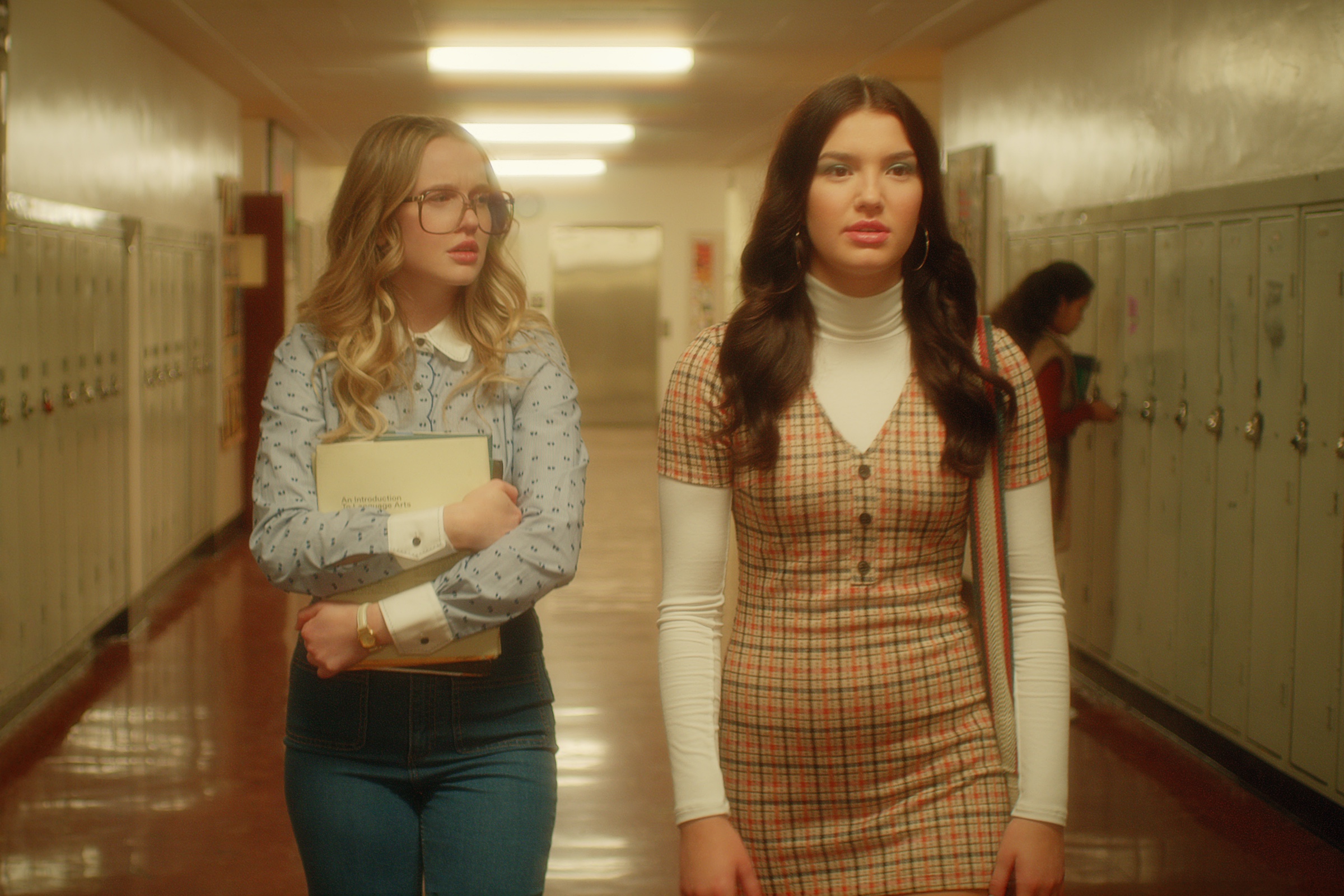 too often feels like it’s bouncing around at random. And with few exceptions (the teen timeline has an effective sexual-assault storyline), nothing feels like it matters.

NETFLIX But even a more straightforward presentation would only underscore that Tully and Kate are extremely thin and inconsistently written characters, whose inner lives seems to come largely from the actors. We’re told repeatedly that each envies what the other has — Kate wants Tully’s confidence and glamour, while Tully wishes she had Kate’s stability — but it rarely comes across in how they interact or behave when apart from one another. The show struggles in particular with deciding exactly who Kate is. At times, she’s treated like the butt of a joke, a pitiable housewife who has to squeeze herself into Spanx to look presentable at a PTA fundraiser; but she also lives in an ultra-chic mansion by the water (in what ironically is a very cheap-looking production), and a few episodes after the Spanx incident she’s seducing Johnny in a sexy corset. Some moments here and there are potent, but they’re not always the ones intended to be the most powerful. (There’s a minor exchange between Tully and a stranger while both are caught up in a convenience-store robbery that hit me much harder than, say, all of her trauma from Cloud’s neglectful parenting.) Chalke and especially Heigl are smart and charismatic enough performers to inject some life into the proceedings and at least make it watchable. But too much of

Firefly Lane seems to be going in circles. Heigl and Chalke are around the same age, and their careers have followed eerily similar tracks. Chalke took over as the second Becky on Roseanne around the same time a teenage Heigl was appearing in movies like Under Siege 2and My Father the Hero. Both had their big breakout successes on serio-comic hospital shows that were contemporaries of one another — Chalke on Scrubs, Heigl on Grey’s Anatomy. Heigl was briefly a movie star (before being punished more harshly by Hollywood for speaking her mind than, say, Mel Gibson was for being a bigot), while Chalke has kept plugging away on the small screen. Their mostly parallel roads finally converge at

Firefly Lane , but it’s not a great stop for either one of them.

Sirens and sci-fi collide in the new teaser for American Horror Story: Double Feature, the 10th season of Ryan Murphy’s