It was with the third film that the Karate Kid franchise really lost its way. The 1984 original is a classic underdog sports movie/coming-of-age tale about bullied teen Daniel LaRusso (Ralph Macchio) learning to defend himself with the help of wise old handyman Mr. Miyagi (Pat Morita). The Karate Kid Part II might have been too much of a good thing, but it changed things up just enough by shifting the setting to Okinawa and making the story more personal for Miyagi. (Plus, Peter Cetera’s “Glory of Love” from the sequel’s soundtrack? Still slaps.)

The Karate Kid Part III, though, is the kind of follow-up that gives threequels a bad name. The film centers around a half-baked revenge plot by John Kreese (Martin Kove), who’s still upset that Daniel beat Kreese’s prized student Johnny Lawrence (William Zabka) at the end of the first film. Where Kreese had once seemed like a human-scale villain — really, just a mean-spirited but understandable counterpoint to Miyagi — now he was an over-the-top sociopath, with no real agenda other than punishing Daniel and Miyagi for making him and his dojo look bad. And for reasons that still make no sense, Daniel shifts allegiance in this go-round from Miyagi’s philosophical, defensive teachings to something more vicious in the Cobra Kai fashion. It’s a terrible movie in many ways, though, admittedly, things also get silly in a hurry if regular guy Daniel LaRusso is constantly having his life threatened, year after year.

Daniel and Johnny returned in 2018 with Cobra Kai, a YouTube Premium original series

that cleverly reversed their roles. Now Johnny was the poor underdog (working as a handyman, no less), teaching karate to Miguel (Xolo Maridueña), a kid in his building who resembles the young Daniel in many ways. Meanwhile, the actual Daniel had become rich and popular, and somehow ended up mentoring Johnny’s son Robby (Tanner Buchanan) in addition to his own daughter Sam (Mary Mouser). The first season was a minor miracle: a shameless nostalgia play that cleverly kept mixing and matching elements from the first movie in a way that made it feel, if not new, then somehow full of life again after all those years away. You were probably unaware that either Cobra Kaior YouTube Premium existed back in the day, which is why YouTube got out of the scripted originals business, and

Cobra Kai ‘s first two seasons wound up on Netflix earlier this year, where subscribers greeted it as a wholly new series. The upcoming third season has been made directly for Netflix, and will premiere on January 1. The second season, for some reason, chose as its model notThe Karate Kid Part II, but

Part III . Kreese returned, seemingly from the dead, stealing the Cobra Kai dojo out from under Johnny and converting Miguel and the other students into menaces. There were some charming moments here and there, particularly with the expanded role for Daniel (who was a supporting character in the first season), which reminded us that Macchio’s boundless charm, like his face, never entirely aged. Mostly, though, Kreese’s hammy supervillainy knocked off the balance of the show — which in its first season was at least half-comedy, half-earnest — until the whole thing climaxed with a lengthy karate brawl at the kids’ high school that left Sam physically scarred, Miguel seemingly paralyzed, and Robby on the run from the law. Again, it’s hard to keep this kind of story going without things seeming ridiculous after a while, but Season Two leaned straight into all its most unintentionally comic traits, while largely abandoning the intentional humor that Zabka had been so good at in the first season. Cobra Kai year three actually sends Daniel-san to Okinawa for a few episodes, in the process bringing back both his Part II love interest Kumiko (Tamlyn Tomita) and his rival from that film, Chozen (Yuji Okumoto). Those scenes are some of the best of the new season, particularly when Daniel and Kumiko reminisce about the late, great Mr. Miyagi, with Daniel realizing he’s now the same age Miyagi was when they met in 1984. But the Okinawa material is more of an interlude — an emotional respite for Daniel, who otherwise is having a tough time — than a narrative touchstone for a season which still feels far too much like

Part III throughout.We pick up a few weeks after the brawl. Miguel is in the hospital, Robby is in the wind. Sam is suffering PTSD flashbacks from her fight with Tory (Peyton List). Johnny is blaming himself for Miguel’s injury, and the school has banned martial arts altogether. Daniel, at a school board meeting where he’s taking most of the blame for the fight, argues, “You don’t need to turn this into some kind of karate

Footloose .” Kreese, meanwhile, is still around, and still plotting to… well, it’s unclear what his endgame is, or if he cares about anything beyond sadism for its own sake. He keeps kicking out students and bringing in new ones in ways that raise the question of why any of the kids — even Miguel’s best friend Hawk (Jacob Bertrand), the most ruthless of the former nerds training at Cobra Kai — would want to be around this lunatic. Several episodes feature flashbacks to a young Kreese in Vietnam

in a way that’s meant to explain how he ended up this way and what’s motivating him. But they’re hilariously out of place with the rest of things, as if Max Fischer from Rushmorehad abruptly taken over as showrunner. 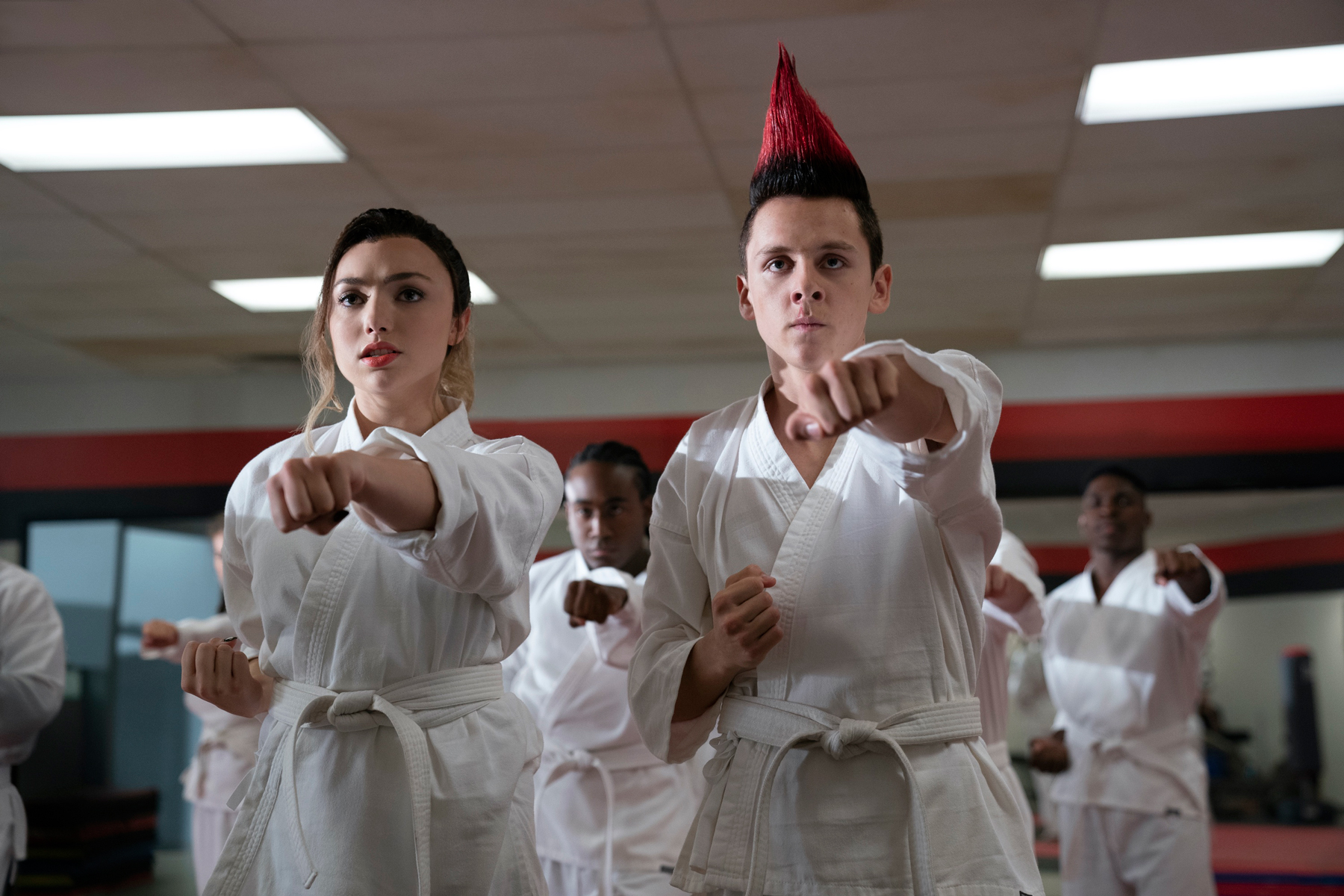 This doubles as an origin for

‘s other chief villain, evil tycoon Terry Silver. The less said about him from that film, the better. Also, Kreese’s commanding officer is played by character actor Terry Serpico, who bares an uncanny resemblance to Macchio’s fellow Eighties teen-movie star Anthony Michael Hall. This makes Serpico a confusing choice for a show that traffics so much in Gen X nostalgia, as if the Vietnam scenes are teasing a Kreese/Farmer Ted team-up that never actually happens.

(L to R) Peyton List as Tory and Jacob Bertrand as Eli in ‘Cobra Kai.’ BOB MAHONEY/NETFLIX Flashbacks aside, Season Three has several other inadvertently amusing sequences. While searching for Robby, Johnny and Daniel not only get into a car chase, but wind up fighting a half-dozen goons in a chop shop, a bit of vigilante justice that would be absurd in this context even without the show’s blatant stunt-doubling for Macchio. (Zabka has always been much better at faking black-belt skills than his longtime co-star. There’s also a similarly awkward substitution for Martin Kove in a late-season fight, and a wide array of martial arts skill among the young actors, even ones whose characters are supposed to be fighting equals.)

Attempts at comedy have been mostly abandoned, though Johnny tries some amusingly unorthodox physical therapy techniques for the injured Miguel, and struggles to master Facebook to impress his high-school ex-girlfriend (and Daniel’s, for that matter) Ali (played memorably in the first film by Elisabeth Shue). The shift into primarily serious territory has extremely mixed results. Daniel and Johnny’s emotional struggles and regrets land effectively, especially during the Okinawa sequences. But Kreese is a cartoon, and the kids are usually afforded only one note each, some of which are played more convincingly than others. (Jacob Bertrand seems most capable of handling whatever the writers throw at him, which makes it disappointing when it’s so often just sneering thuggery.) Loyalties keep shifting not because it makes sense for any of the characters, but because the plot demands these constant, increasingly dumb reversals. There’s another late-season fight involving multiple teens that’s impressively shot and choreographed, but is so obviously criminal on the part of half of them (especially in a season that has spent so much time on the legal consequences of karate fights) that it’s hard to focus on anything other than why nobody just calls the cops. Sequels are always under pressure to up the stakes of the previous installment. Even Karate Kid Part II

did that, with a climax where Daniel and Chozen battle potentially to the death. (Spoiler: Daniel honks Chozen’s nose instead.) But the tension between the different dojos has long since crossed the line from appealingly larger-than-life to outright ludicrous. It’s a peril of continuing the story of this rivalry for long.

It’s not surprising, though, that Johnny and Daniel’s stories have more depth. They’ve been around longer, the actors are more seasoned, and the audience and creators have more investment in them. (By far the strongest Miguel scene of the season, for instance, is a long-overdue conversation where he and Daniel realize how much they have in common, but it’s effective almost entirely because of our decades-old movie memories.) But they can’t carry a show that’s increasingly goofy everywhere else. “Sometimes,” an old friend of Johnny’s suggests at one point, “it’s good to visit the past, to know where you are now. But you can’t live in the past.” Earlier in its run,

was able to live equally well in the past and the present. Not anymore, unfortunately.

How to Watch Falcon and Winter Soldier Online Free: Stream on Disney+

Sirens and sci-fi collide in the new teaser for American Horror Story: Double Feature, the 10th season of Ryan Murphy’s