Kelly Loeffler had been a senator for just a few weeks when she found herself at the pulpit of the Rev. Raphael Warnock’s church in Atlanta. He was only 10 days from entering the race for her senate seat, but she was still included as part of the speaking lineup for the Martin Luther King, Jr. Day service at Ebenezer Baptist, where the civil-rights giant was once a pastor. Nearly a year later, Loeffler would call Ebenezer a place of “radical liberalism” during a debate with Warnock. But on that January day, Loeffler told those assembled that Warnock’s church was a place that “puts words into action.”

“I grew up on a family farm in a rural town, far away from downtown Atlanta. But Dr. King’s story, his leadership, his words, and his actions, had a profound effect on my life and on my values,” Loeffler said to a mostly black audience. “As a young person working on that remote farm, I never imagined that I could be on this stage. But Dr. King’s call to service, to sacrifice, to put others first — it shaped our home and inspired us to ask what Dr. King asked the world: ‘What are you doing for others?’”

That “most persistent and urgent question,” as Dr. King termed it in 1957, is what Georgia voters should be directing now to Loeffler and her fellow Republican David Perdue. Both of them need to win January’s run-off elections versus Warnock and Jon Ossoff, respectively, in order to keep Mitch McConnell in charge of the Senate for at least the first two years of Joe Biden’s presidency. But while that question may have influenced Loeffler’s childhood, the lesson didn’t take. No such “words into action” here; she and Perdue seem only to consider what they were “doing for others” when they were serving the interests of Donald Trump or their own stock portfolios.

As a fellow speaker at that MLK Day program, I was also on the dais next to (among others) Loeffler, Rev. Warnock and Georgia’s top elections official, Brad Raffensperger. If we’re to talk about what Loeffler has done for “others,” it would be fitting to start with those two.

The reverend, thanks to Loeffler, has been unfairly beset with allegations of unpatriotism in his sermons and the label “radical liberal.” Loeffler spat out the label so many times during last Sunday’s debate that one might have thought it was an epithet, or even part of his name. Loeffler has demanded that Raffensperger, a Republican, resign while offering insipid condemnation of threats and harassment directed at his family and other officials because they dared defy President Trump’s reckless and racist push to disenfranchise voters in Georgia and other states that didn’t choose him.

Yes, Georgia’s two senators backed litigation against their own state’s elections, which they will say are just fine should they win their run-off elections next month. They were in favor of an effort to disenfranchise their own voters, because Donald Trump.

Their choice to back this sycophantic, rapacious litigation “isn’t hard and it isn’t partisan; it’s American,” the senators wrote in a statement. “No one should ever have to question the integrity of our elections system and the credibility of its outcomes.” That last sentence is actually true. However, much like an MLK quote spoken in earnest by a Republican from the pulpit of a black church, the change in messenger affects the message. Her idea of putting these “words into action” are very different from mine, or truly anyone who has a verifiable interest in having free and fair elections. We don’t need lectures from the likes of these two, who counted themselves among those trying in vain to suppress votes already cast by four entire states, just because her guy lost.

As part of the four states’ retort to Paxton’s lawsuit, Georgia’s attorney general Christopher Carr wrote that “Georgia did what the Constitution empowered it to do: it implemented processes for the election, administered the election in the face of logistical challenges brought on by Covid-19, and confirmed and certified the election results — again and again and again.” There is one again for every time Georgia successfully counted its votes, with each tally concluding in a Biden win. 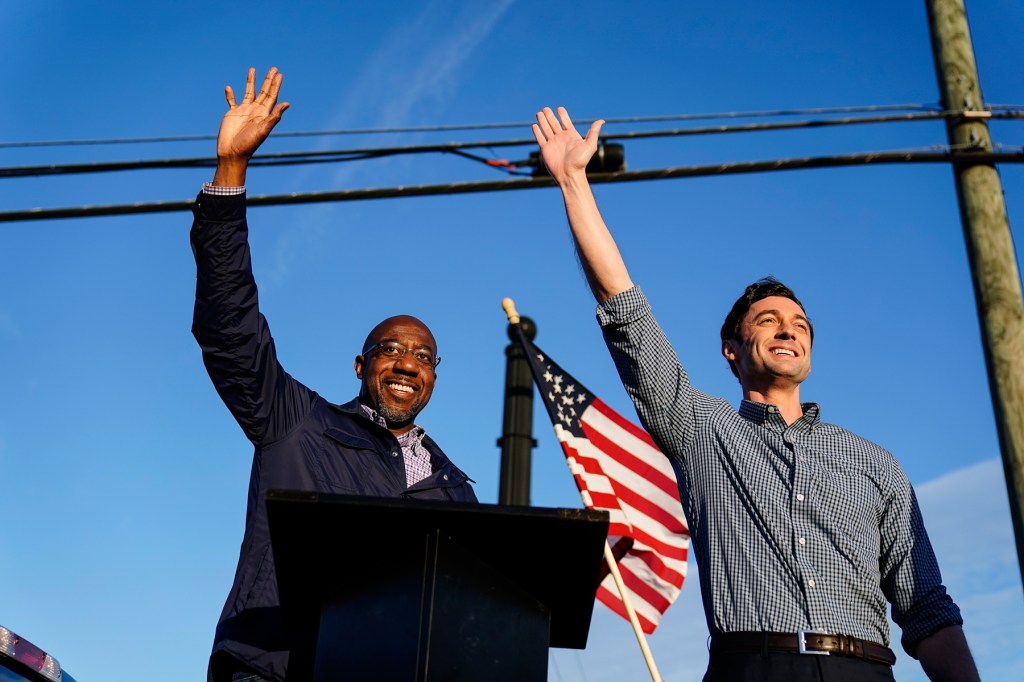 Neither Loeffler nor Perdue were stupid enough to be seen rallying recently alongside pro-Trump attorneys Lin Wood and Sidney Powell, who were spitting conspiracist tripe about voting machines and encouraging Georgians not to vote in the run-off. However, by seeking to legitimize Trump’s feeble, would-be-authoritarian power grab, the two incumbent senators ultimately share the same goal as Wood and Powell: for the voters to see their votes stolen away.

More than 100 of Loeffler and Perdue’s colleagues on the Hill also made themselves available for a presidential pat on the head on Thursday when they filed an amicus brief to the Supreme Court in support of Paxton’s lawsuit. Paxton himself was maybe auditioning for one of those pre-emptive pardons Trump has been advertising, seeing as the Texas attorney general was indicted years ago on felony securities fraud charges that has yet to go to trial. (He maintains that he is not guilty of the charges.)

Loeffler and Perdue have faced their own legal jeopardy this year, both of them beset with varied allegations of financial corruption. The Securities and Exchange Commission, Senate Ethics Committee, and the Department of Justice have all cleared both Loeffler and Perdue for their suspicious stock activity, but their troubles aren’t over. Last Sunday, Loeffler dodged a moderator’s question about whether members of Congress should be able to own stock at all, instead aiming at the “leftwing media” for reports about her family’s $2 million commodities dump right after she attended a January 23rd coronavirus briefing. Loeffler can turn the hose on us in the press all she likes, but this still looks dirty. Also, Mother Jones broke news about Loeffler’s business dealings before being appointed to her Senate seat, which involved aiding a firm making reckless acquisitions of natural gas stock that reportedly ended up costing Georgians an extra $18 million in heating and gas bills between 2006 and 2007.

It was recently reported that Perdue, who chose not to show up for his Sunday debate with Ossoff, sold more than $1 million in stock earlier this year from an Atlanta financial company where he once sat on the board, right before the company’s CEO bailed and the stock fell precipitously. Perdue is also being scrutinized for a Thursday ProPublica report that details the off-market sale of his Washington, D.C., home to an official whose industry is regulated by the Senate Banking Committee on which he sits.

Voters continue to get more information about what Loeffler and Perdue have “done for others,” particularly in their state — and the evidence is damning. Both senators voted begrudgingly for the first pandemic relief package in the spring, then stood firmly against further relief funding that Georgians needed.

First-time jobless claims nearly doubled last week in the state, on par with declining national economic prospects. Per the Capitol Beat News Service, the state of Georgia has paid out $16.3 billion in state and federal unemployment benefits to more than 4.1 million Georgia residents — exceeding the last nine years’ total combined. Its economy is doing well compared to the other 50 states, little thanks to the two senators who have stood in the way of necessary federal aid.

This runoff in January will be the first chance since the November election that voters will have to administer some payback. Public officials who enabled Trump’s abuses of power have it coming, no doubt. Georgians could vote them out solely for that reason, and they’d deserve it.

Inherent in that motivation, however, are the politics of retribution that Trump and his party have made so endemic to our American culture. This president has made accountability look like revenge. With the nation watching Georgia, this is the moment to begin rejecting Trumpian politics and shaping something better. Americans have to return to demanding service from our public servants.

Loeffler and Perdue haven’t come close to serving their constituency in this moment of catastrophe. They are terrible at their jobs, and it is for that reason that they deserve to lose them. Just as Dr. King asked us to measure ourselves by an altruistic standard, voters now should recognize Loeffler and Perdue’s failure to meet it.