A review of “Happy,” this week’s Fargo, coming up just as soon as I punch a U.S. alderman…

That last week’s episode was so special after a very up-and-down Fargo year felt less reassuring than it could have, because it was such an outlier in both style and focus. Obviously, it’s great that Noah Hawley and company could craft a stunning black-and-white Wizard of Oz homage in the middle of their sprawling gangster saga, but it didn’t do much to justify some of the iffier choices from the main arcs of this season.

“Happy” isn’t the artistic triumph that “East/West” was. But in crossing back over the Kansas/Missouri border and catching up with all our surviving characters — a few of whom didn’t maintain that distinction for long — this latest chapter makes the season’s various feuds and character pairings feel more vital and interesting than most of them have since early on.

Or maybe it’s just that Ethelrida returns to prominence.

You remember Ethelrida Pearl Smutny, right? Narrated the season premiere, seemed to be in the middle of a lot of different stories in the first few episodes and then, just… vanished? Though she was a high school student and not a cop, she otherwise fit very comfortably into the Molly/Lou/Gloria slot of the morally upright hero who’s smarter than the bad guys keep taking her for. And E’myri Crutchfield seemed, like Allison Tolman, a great find by the Fargo casting team. But within a few episodes, Ethelrida got pushed to the margins in favor of various mobsters, lawmen, and outlaws. (So, for that matter, did Oraetta Mayflower, who was positioned in those early episodes as Ethelrida’s most direct rival.) When she appeared in episodes in the middle of this season, it was almost as an afterthought.

With “Happy,” Ethelrida writes herself back into the center of the narrative, and the episode is much better for it. War between the Faddas and the Cannons rages to an almost absurd degree, especially coming on the heels of Zelmare and Swanee killing what looked like dozens of innocent civilians at the train station

. The Faddas are clearly winning, especially after Loy’s attempt to recruit Leon’s oft-mentioned cousin Happy backfires, with Happy instead arranging for the Faddas to install Leon as Loy’s replacement. But mayhem reigns throughout Kansas City.

Especially given the season’s themes about how non-WASP ethnic groups are marginalized and suppressed by the establishment, it feels especially strange that the state wouldn’t call in the FBI or the National Guard to deal with the rising tide being unleashed by an Italian gang fighting a black one. 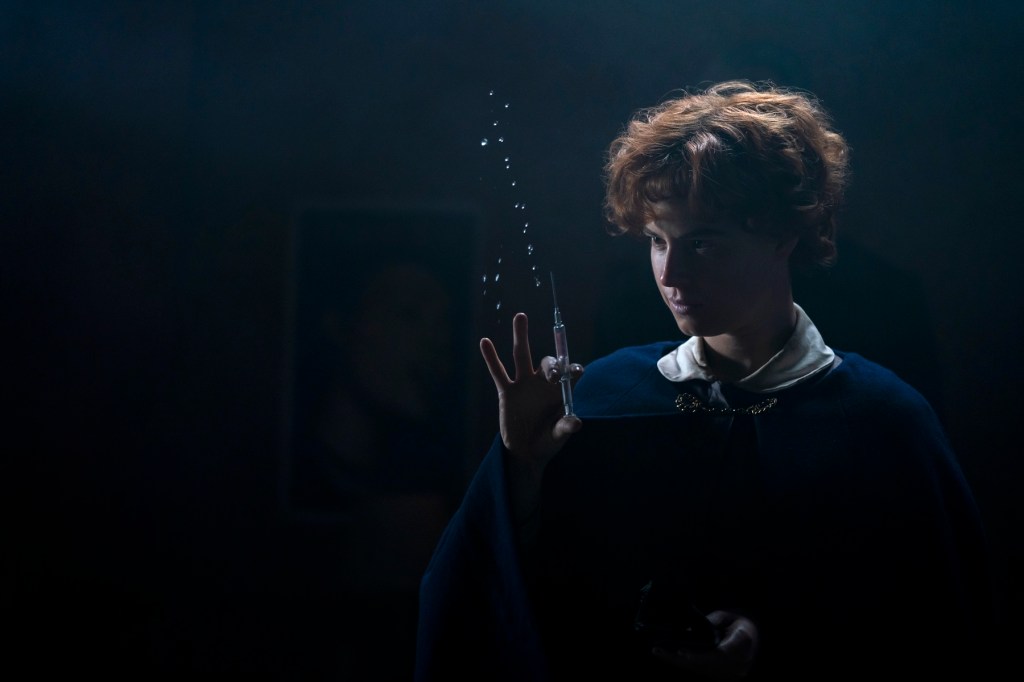 Later, Captain Roach will do Ethelrida a favor, interrupting Oraetta’s attempt to poison the girl, and scaring her right across the street to her own apartment, where police are waiting to arrest her for the attempted murder of Dr. Harvard. It’s the first time the family curse seems to have worked in someone’s favor. Dibrell did say that Roach was more interested in “sunshine” than whatever Zelmare once tried to offer him, and Oraetta, with her white uniform and chipper demeanor, has the trappings of sunshine, even if we know how dark her heart is. Ethelrida sleeps through most of it, waking only so she and her parents can watch Oraetta’s perp walk. But based on how she carries herself in the earlier scene on the porch and the concluding one in Loy’s office, she might have been prepared to glare right back at both monsters in her bedroom.

Jessie Buckley as Oraetta Mayflower. Elizabeth Morris/FXPlenty of events not directly related to Ethelrida happen, too, most notably Gaetano murdering Odis… and then dying moments later when he slips while walking, accidentally blowing his own brains out as he falls. This is less a Coen homage than a Steven Soderbergh one, since it evokes the death of White Boy Bob in Out of Sight

; but it’s also a karmic payback for that time Gaetano murdered the busboy and bartender because the busboy laughed at him for slipping on ice. Odis is no great loss to anyone, the season most of all, but Gaetano had grown even more entertaining in becoming Josto’s pathologically devoted guardian than when he was trying to kill him. The brothers share one last happy moment as Gaetano spins the tale of why he got sent back to Sardinia when they were kids, but violence in the universe of Fargoalways has consequences, and the brothers’ need to punish Odis for betraying them results in the big man bleeding out a few feet away from his final victim. It’s also similar to how Danny Crowe dies on

, which perhaps makes Elmore Leonard the throughline, and again makes me wish the Coens had followed through on their plans to adapt Leonard’s

We also see the first real glimpse of Satchel Cannon becoming Mike Milligan when, on the road back from Liberal, Kansas, a few racists in a pickup pull over to hassle him. Satchel has barely spoken at all to this point in the season, but he proudly draws Rabbi’s pistol from his waistband and tells his harassers, “This is my world. I’m the boss. I tell you what to do.” It would feel like a triumphant moment if we didn’t know how disappointing Mike’s life will turn out to be, and how the wheel of morality on this show eventually grinds down men like Gaetano and him.

Memorable as all those other scenes are, the highlight is Ethelrida braving the lion’s den itself, sitting down with Loy Cannon to convince him to set her family free. Though he’s at a low ebb with the state of the mob war, he is still far more powerful than she is, and only indulging her presence on behalf of his oldest son. But she impresses him by identifying the Henri Regnault painting Loy has a copy of in his office — and appears to impress him even more by revealing that the ring she has in her possession once belonged to Donatello Fadda. We don’t know exactly what the play is, but Crutchfield and Chris Rock play the end of the episode in ways that make clear that, like most of what Ethelrida says and does, it’s very smart.

Better late than never to put her in the forefront again.

* This was the episode that was about to film before the quarantine shut down production back in March. In the early minutes, I was looking to see if characters were remaining farther apart from one another for Covid safety reasons, like how everyone in Loy’s hotel suite was sitting at a distance when Happy met with Loy and Buel. But that seems a choice to make the staging more dramatic, since later scenes, like the Fadda brothers in the car, put the actors very close together. Covid precautions are a complicated thing, but everyone made it out of filming OK. Still, we’re at a moment where even shows set long before the pandemic can’t help make me think about it while watching.

* Finally, it took me a few episodes to realize that Joe Bulo, the tall and mustachioed Fadda soldier played by Evan Mulrooney, is the younger version of the Kansas City syndicate middle manager played by Brad Garrett back in Season Two. In the Seventies, Joe will be the supervisor of… Mike Milligan.

Michael C. Hall’s Dexter tries to blend in as a townie in the new trailer for Dexter: New Blood, set